I Get UP! – In the Wilds of Michigan

Many people know all about the mitt…and I’m not referring to the former governor turned Presidential candidate (though he was born here). The “mitt” that is Michigan is one of the most enduring monikers we have for an American state’s shape. In fact, astronauts say it’s one of the most recognizable and easily identified land masses seen from space.

Much like retrieving a scolding hot casserole with one oven mitt, Michigan needs more than a one-handed grab. It simply cannot be surmised by the mitt alone and that is where the UP comes in.

Commonly referred to by Michiganders and those familiar with the area as “The U-P,” Michigan’s Upper Peninsula is the all-too-forgotten second (some might say better, but let’s not get into a turf war) half of Michigan.

Just across the expanse of the Mackinac Bridge lies a land much appreciated by those who’ve discovered it, but most often it is a land that remains largely unknown to many.

In what must have been one of the best examples of slick negotiation, the Upper Peninsula—though connected directly to the state of Wisconsin with no natural connection to the rest of Michigan—was put in the books as part of Michigan.

The folk of the UP are tongue-in-cheekily known as “Yoopers” (derived from being from the “U-P”). They jokingly refer to their fellow statesmen to the south as “trolls,” being that all other Michiganders are from below the bridge (the Mackinac Bridge that is).

All this talk of trolls, bridges, and clandestine wilderness sounds like the makings of a fairytale, and though the UP is not chalk full of mystical creatures or magical forests, it’s pretty darn close to being one of the most fantastical places on Earth.

Adventure in the Upper Peninsula of Michigan: A Superior Place

For the outdoors enthusiast it’s a little bit of everything all rolled into one: cool crystal-clear waters, scenic mountaintop vistas, seemingly endless hiking trails, fish by the boatload, wide open beaches often with nary another soul in sight, wildlife-packed woods, awe-inspiring waterfalls, and rich mineral deposits—and that’s just what you can expect in the summer months.  It is also a winter wonderland for snowmobiling, skiing, fishing, hunting, sightseeing and ice skating.

I could name a million beautiful and awe-inspiring things that I love about spending time in the UP, but one of the things that sticks out in my mind is seeing Lake Superior at dusk.  It was so still and smooth that if I didn’t know better, I might have taken it to be a giant mirror reflecting the sky.  Like many other experiences I’ve had in the relative seclusion of the UP it was one of pure calm and evoked a feeling of being part of nature in a way that reminds you just how little, but also how lucky you are to be on Earth.

In short, it’s a place where you can truly lose yourself in the wilderness and a place to forget the noise and distractions of modern life (that’s right, WiFi and cell phone signals are hard to come by) and leave behind what Van Halen describes as livin’ at a pace that kills.

But, just like the familiar Van Halen line (coincidentally also from Runnin’ With the Devil), the simple life ain’t so simple.  Places like the UP are quickly becoming harder and harder to find as pressure on our public lands from industry, development and climate change put America’s wild spaces in the balance.

We all know you’ve got to roll with the punches especially when dealing with climate change that is already affecting our land and wildlife, but that doesn’t mean we can’t win the fight to safeguard our environment for the future.

According to the recent NWF report Valuing Our Public Lands, protection of air quality, water quality, wildlife habitat, unique wild plant and animal species and the ability to safeguard wilderness for future generations are consistently the top priorities Americans associate with federal protection of our public land. 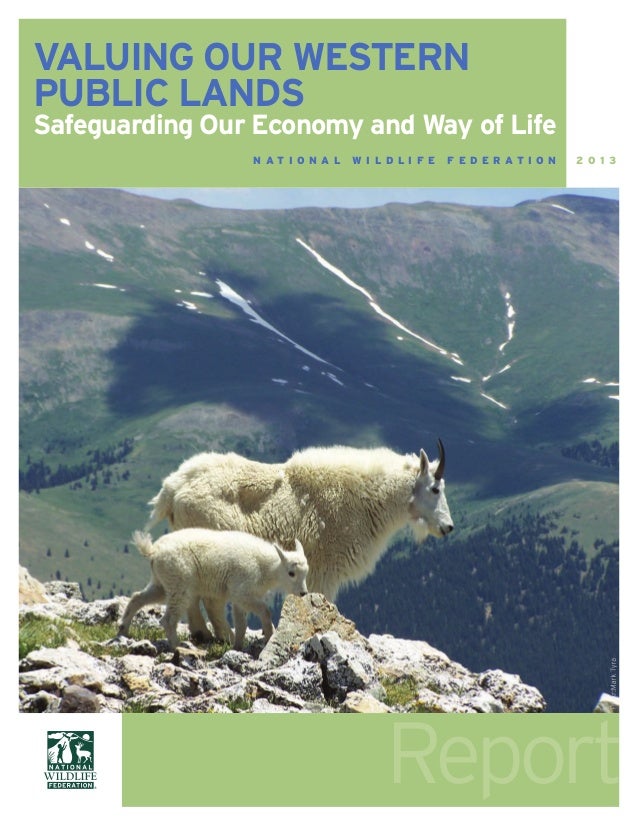 The report goes into detail about the value Americans place on public lands as well as the tangible worth of preserving this land for our economic future and national wellbeing.   Though it focuses mainly on Western states, the sentiments and evaluation of the intrinsic and financial worth of public lands ring true for Americans across the country.  After all, this land is merely managed by the government, but belongs to its citizens.

Bills in Congress undercutting the American people’s power to protect our iconic landscape are affronts to our heritage and rights as owners of that land.  Elected officials are putting these treasured places at risk and gambling their future in favor of new development and industry that is not in-line with the collective opinion of U.S. citizens regarding the best use for America’s wealth of wild places and natural spaces.

I can’t imagine a world without places like the UP and I’d hate for any future generation to get to the point where these places don’t exist anymore.  The good news is that the drive to protect public lands in the U.S. is strong and many people feel the same way about our shared landscape.  The time to band together is needed now as ever before in protecting these cherished outdoor havens.

Jump into the debate and tell your elected officials what public lands mean to you and why they should be safeguarded in the best interests of their owners, American citizens, and our posterity.